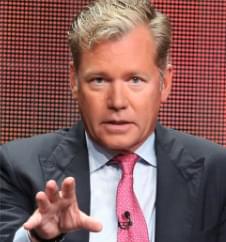 Christopher Edward Hansen (born September 13, 1959) is an American television journalist and YouTube personality. He is known for his work on Dateline NBC, in particular the former segment To Catch a Predator, which revolved around catching potential Internet sex predators using a sting operation. He also hosts Killer Instinct on Investigation Discovery, which documents homicide investigations. In September 2016, he became the new host for the second season of the syndicated show Crime Watch Daily.

Hansen was born in Chicago, Illinois on September 13, 1959 and grew up in West Bloomfield Township and Birmingham, Michigan. He attended Brother Rice High School in Bloomfield Hills, Michigan. In an interview with City Pulse, Hansen said that when he was fourteen years old, watching and following the police and FBI investigation of the disappearance of Jimmy Hoffa inspired him to become a journalist. In 1981, Hansen graduated from the Michigan State University College of Communication Arts and Sciences with a bachelor's degree in Telecommunication.

Hansen's notable work for Dateline includes coverage of the Columbine High School massacre, the Oklahoma City bombing, the Unabomber and the TWA Flight 800 disaster, and investigative reports on Indian child slave labor and counterfeit prescription drug sales in China. Hansen was responsible for most of Dateline's coverage of the September 11 attacks, as well as stories on terrorist groups and the operations of Al-Qaeda. He also exposed how a group linked to Osama Bin Laden had attempted to buy missiles and nuclear weapons components, and he also worked on an exclusive report on the Air France Flight 8969 hijacking. His series on deficient airport security resulted in the Federal Aviation Administration investigating and ultimately revising its policies.