More and more companies are selling Real and Generic ED pills today. The most popular pill they are selling is Viagra from Pfizer. So, many men think because these pills are coming from a reputable company like Pfizer, quality must be good. What they don’t know is that there are still many ways to get ripped off and SCAMMED.

Bad to the Bone. Busted by the Feds! 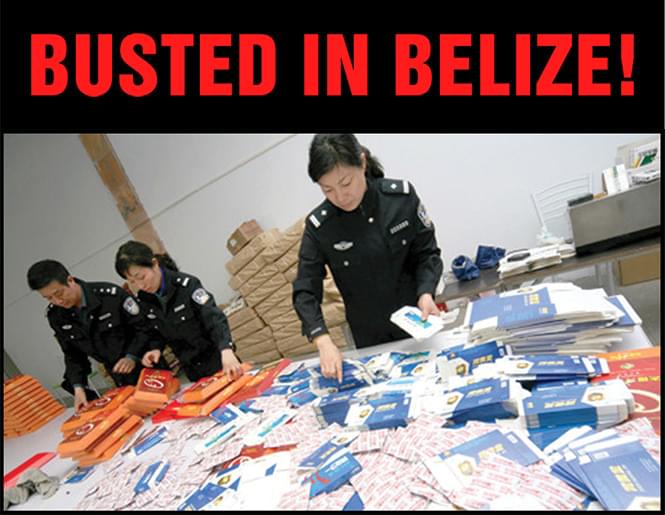 This outlaw pharmacy was based in a house in Belize. They were mixing this stuff in barrels in a house—shipping them to Mexico and then sending them into the US and Canada. Needless to say, I would not recommend this place. I included them so you see that many of these online pharmacies offering low-priced generic Viagra and generic Cialis—are a total scam.

Some guys have even DIED from getting bad pills loaded with dangerous ingredients. This place had super low prices—prices so low that many guys went for it. But the instances of illness and guys getting deformed—meaning they could no longer get another erection because their Johnsons got messed up with bad ingredients were reported. 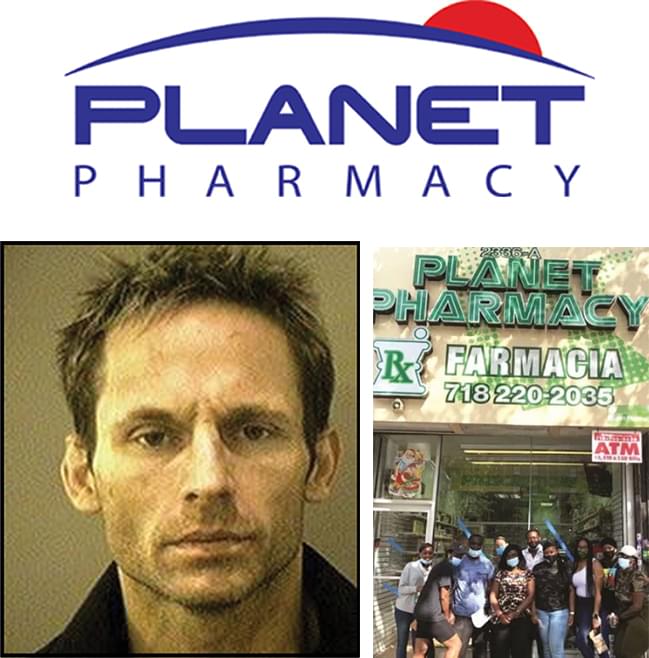 Don’t get tricked by some lowed-priced shit — you always pay for it in the end. Its because of places like this that the other guys in the adult business urged me to put out this information—so that no more guys get killed — no more guys get ripped off. It’s like that crazy shit going on in the Dominican Republic right now. American tourists are dropping like flies. As of this writing it’s over 12 people are mysteriously dead — and hundreds if not thousands more getting incredibly ill. 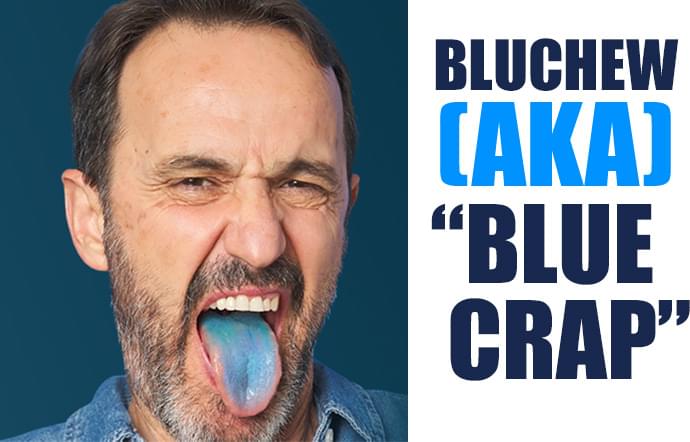 BlueChew.com is operating a scam. A scam on many levels. Fake testimonials, cheap pills, fraudulent ads, etc. Their products are NOT even approved by the FDA. Yikes. In my opinion and in the opinion of “legal eagles”, they are distributing an “unapproved new drug”. I don’t think it will be long before the FDA shuts this scam down. They have already had their LegitScript certification ripped away from them. They failed the laboratory test conducted on their Tadalafil pills with the ingredients being outside of the acceptable zone the law permits. 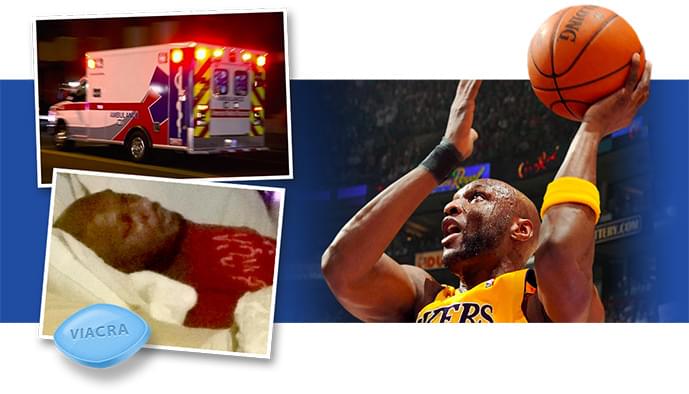 Former NBA superstar Lamar Odom almost died due to taking some counterfeit Viagra pills. Like many men he was on his deathbed because of fake Viagra pills manufactured in China and sold in America disguised as real Viagra. The story was reported all over the world and landed Lamar on the cover of the National Enquirer. Initially, it was reported that he took some herbal pills, but later it was determined that the Laker great had merely taken what he thought was real Viagra. It was not. Despite the near-death of Lamar Odom, fake Viagra continues to make its way into America over the Internet. Authorities are trying to put an end to it, but the criminals behind these schemes are crafty.

I put this guide together to prevent men from dying or ending up in the hospital from taking legitimate-appearing Viagra from crooked Internet sites. So, stick to the top sites I review in this guide.

These Books Will Send A Shiver Up Your Spine! 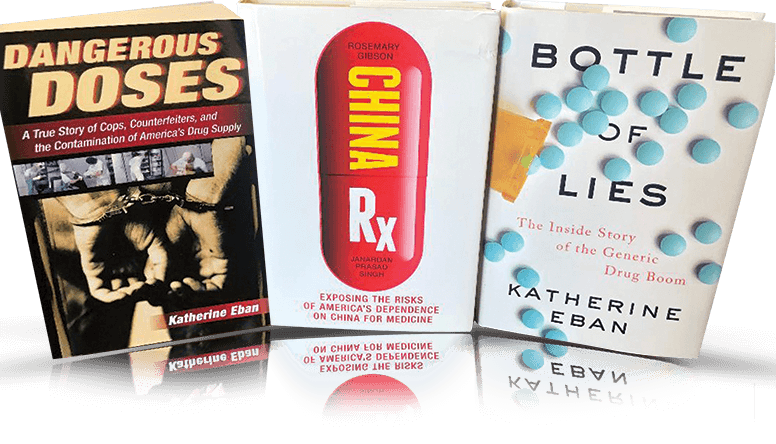 The illegal activity that goes on in the generic and counterfeit manufacturing of E.D. medication in other countries is sickening!

The lies, the unsanitary conditions, the crooked practices make the "wet markets" of Wuhan, China seem sanitary. These sleazy crooks in China — and elsewhere — using blue inkjet coloring to color their fake Viagra tablets to save half a penny a pill, knowing it is putting like in danger — this is just one sick example. I highly recommend these books. They were part of my research. All I can tell you is — make sure you buy from the real companies or you will end up as a sad statistic — dangerous stuff!

Fake pills come into the USA every day. Border agents only stop a small fraction. Many are dangerous, and they end up being sold on websites. The danger is escalating! 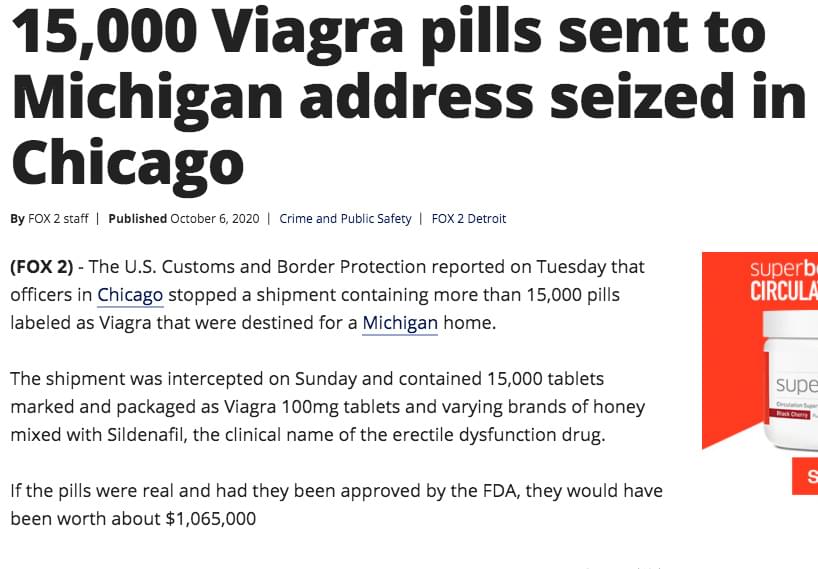 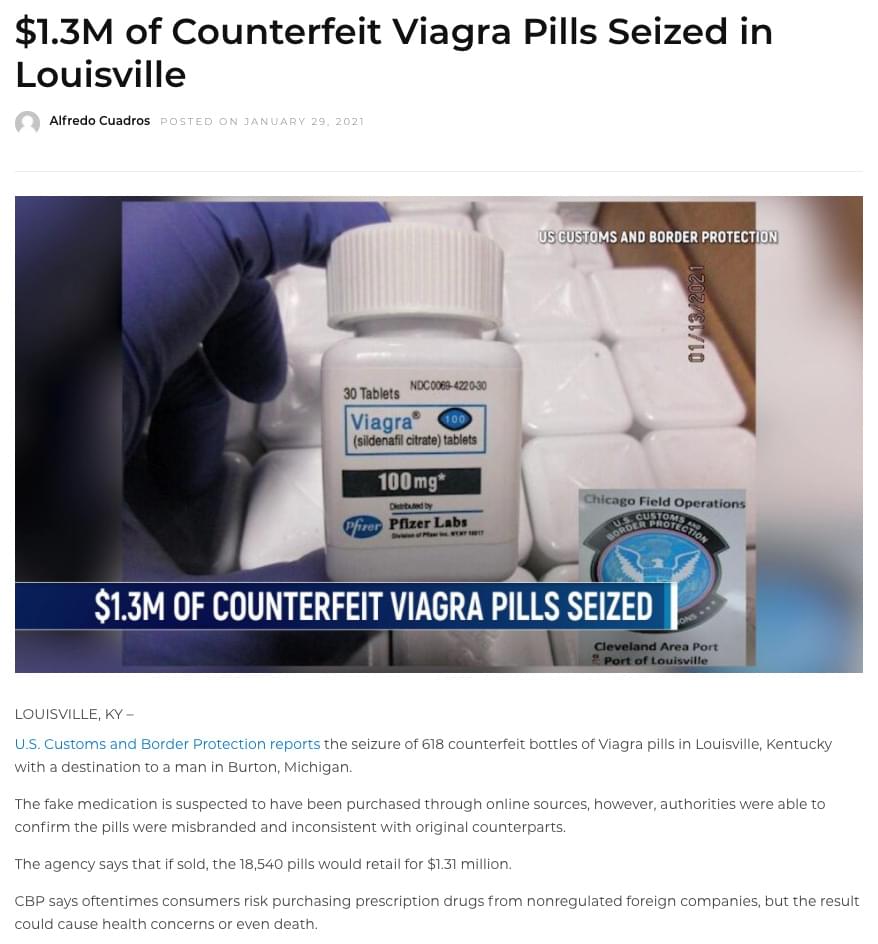 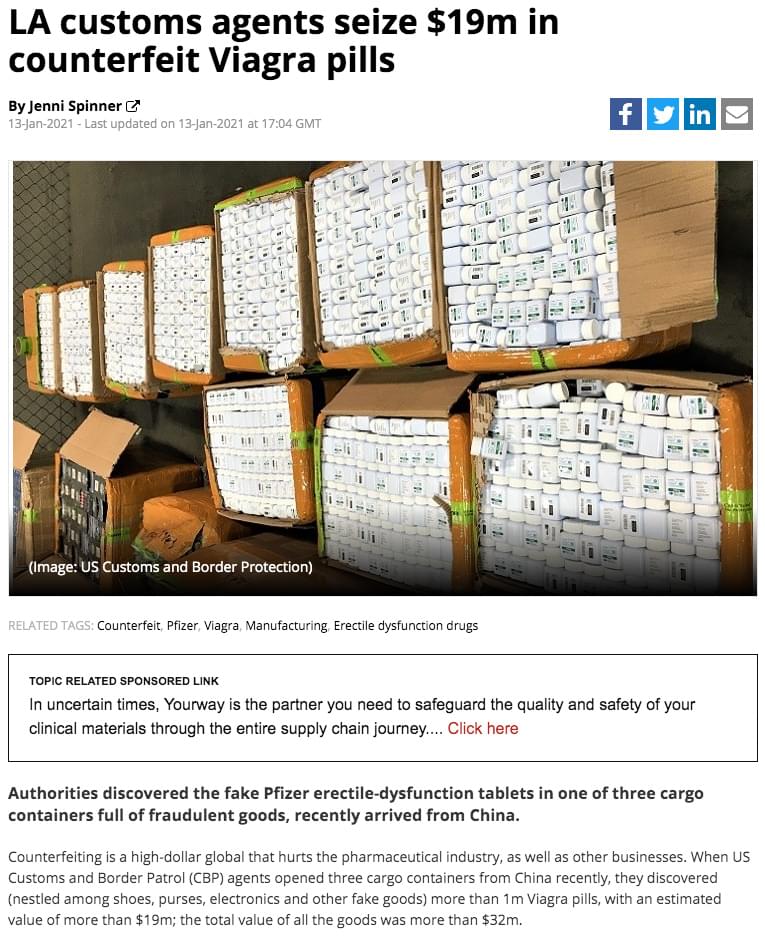 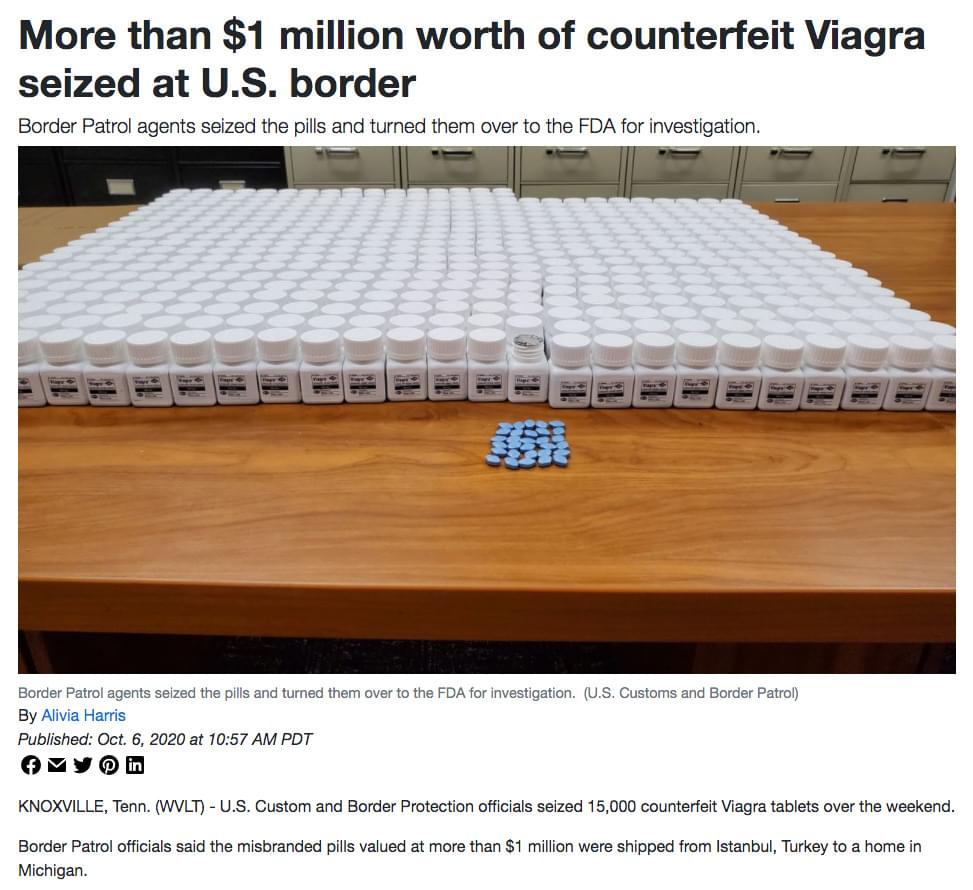 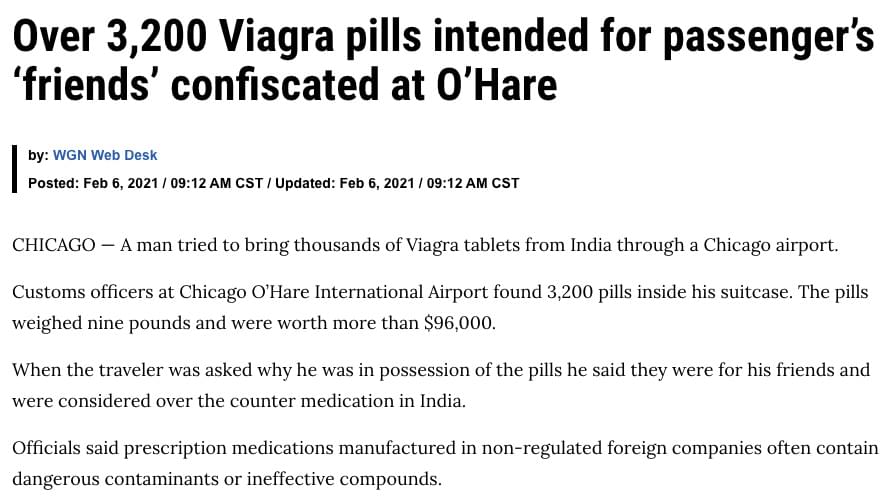 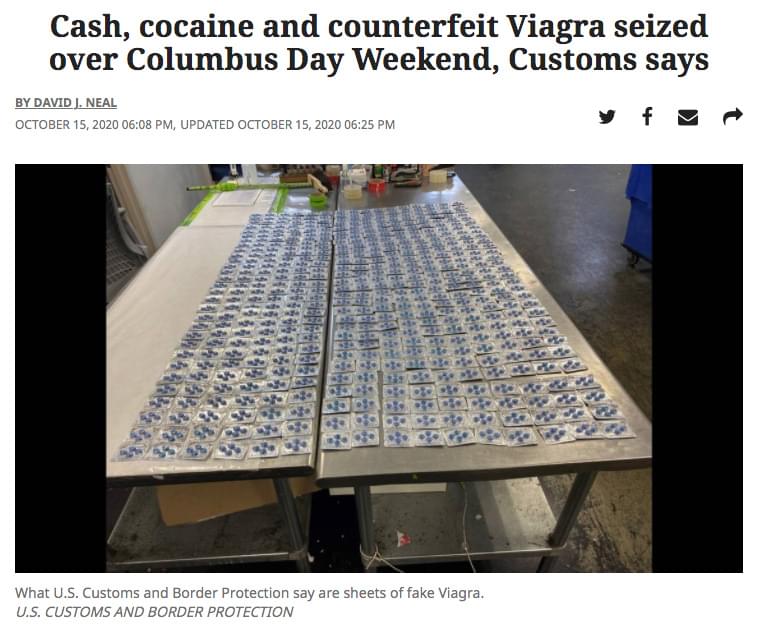 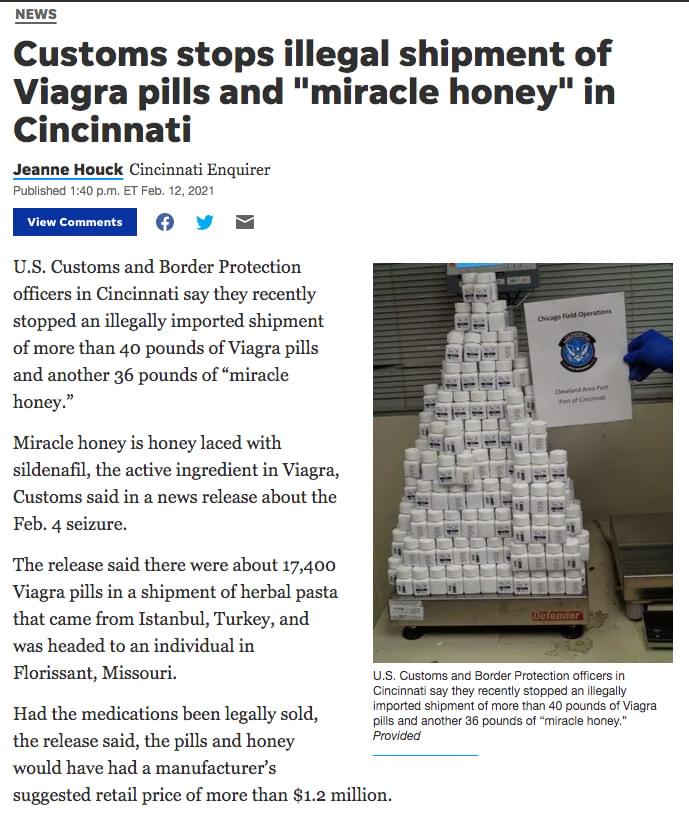 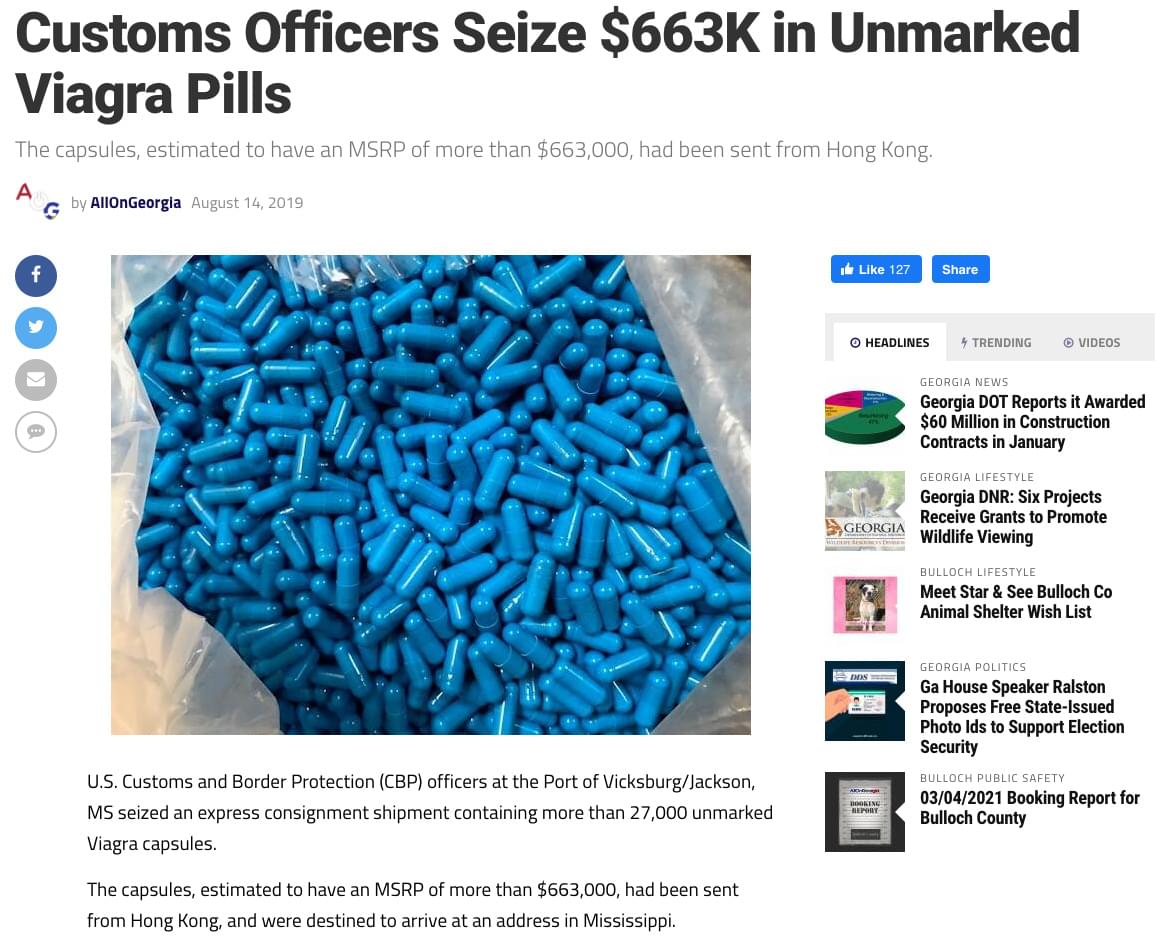 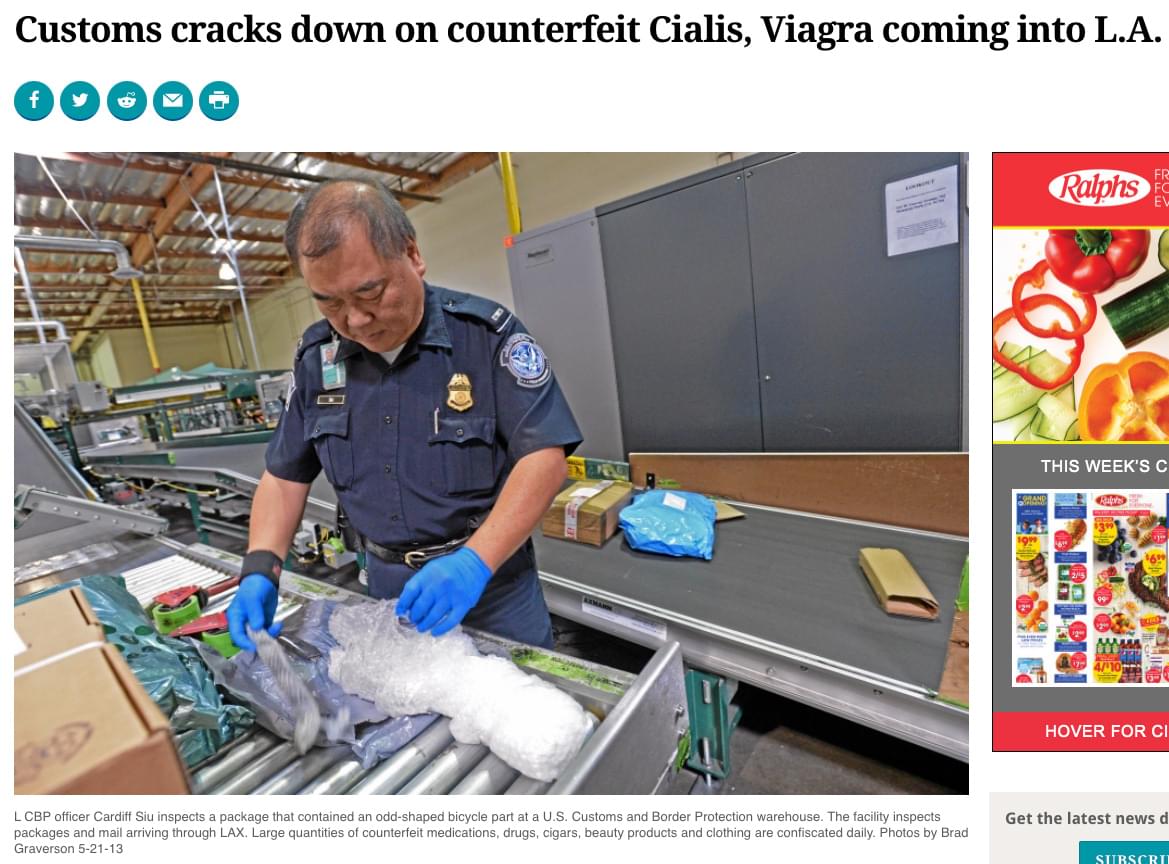 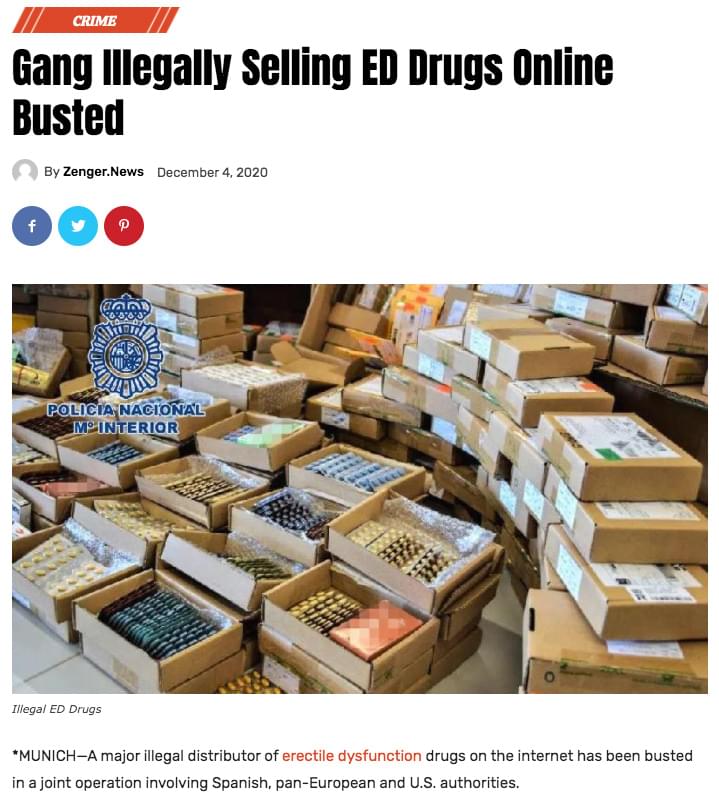 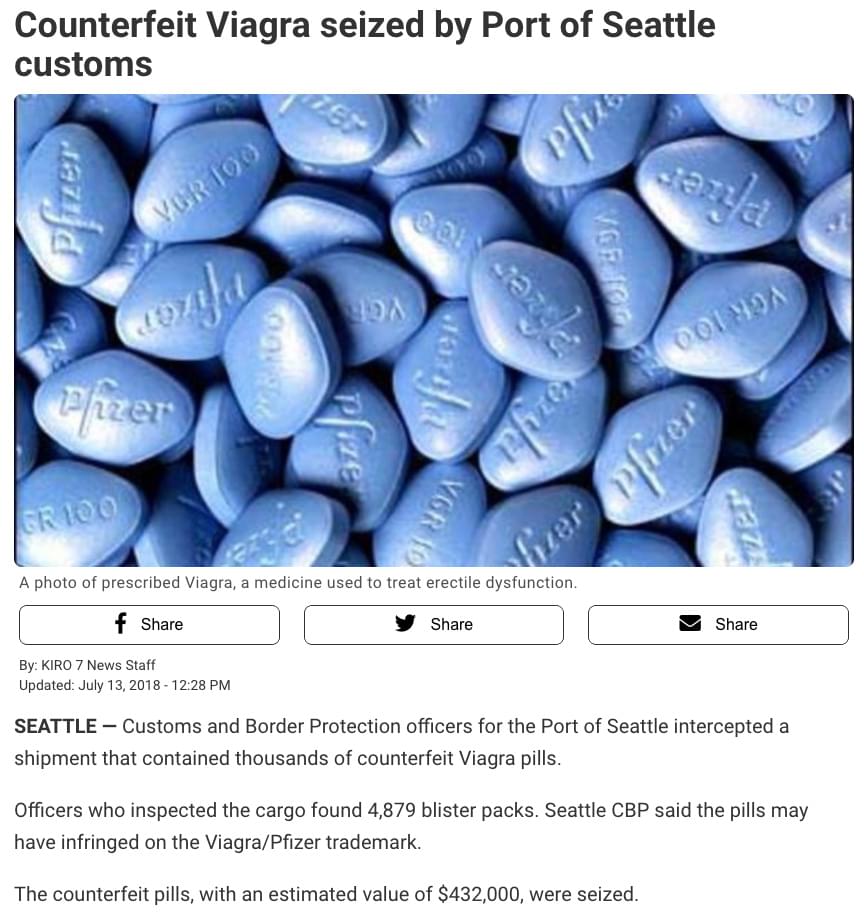 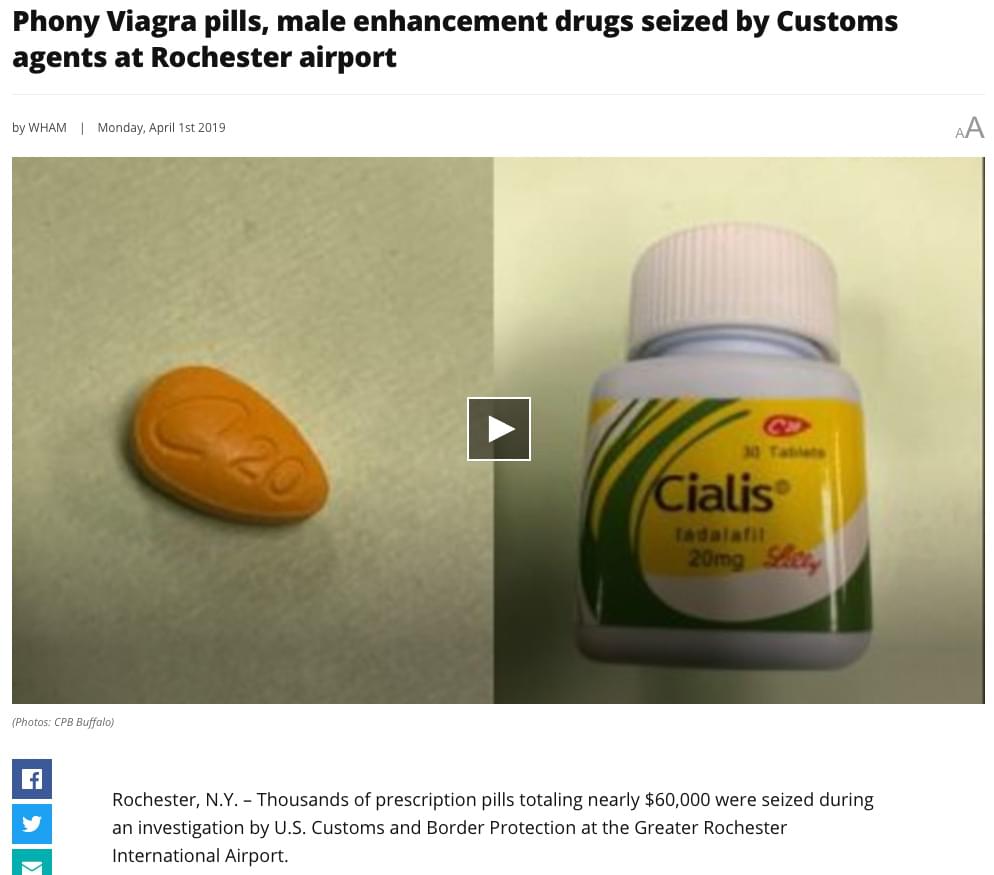 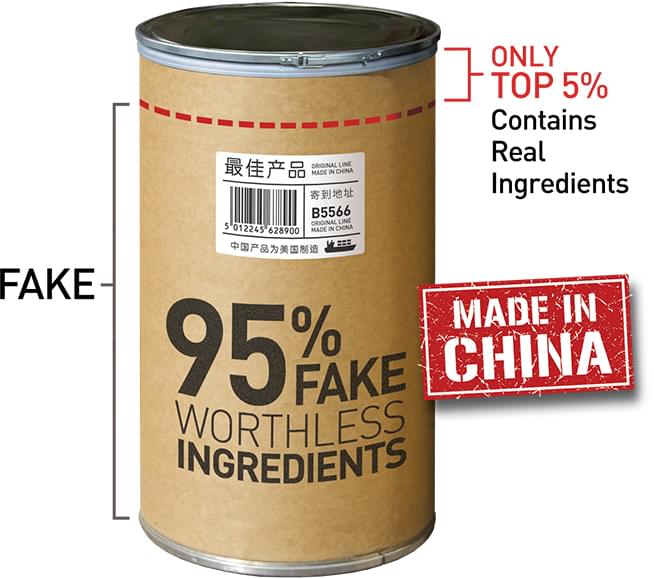 Here is How Sneaky Chinese Manufacturers Trick American Companies with FAKE Ingredients: Sildenafil and Tadalafil are shipped in 25 kg drums. When the drums arrive at customs in the United States, custom representatives test the ingredients to see if they are authentic. The way they test the ingredients is to take a sample from the top part of the berrel. So the crooked manufacturers in China load up the top 5-10% of the barrel with good ingredients, knowing that is where the test sample is taken from. The remainder of the 25 kg drum is then filled with worthless crap! In the case of Sildenafil, since it is white in color, often the sneaky manufacturers would fill 90% of the drum with powdered milk, because it is white. Some American companies are so crooked they don’t care! They cover their asses by testing only the top part of the drum, knowing the rest is pure worthless junk, but they are covered and can make higher profits. Too many sharks in these waters! That is why my testing is changing the industry!! 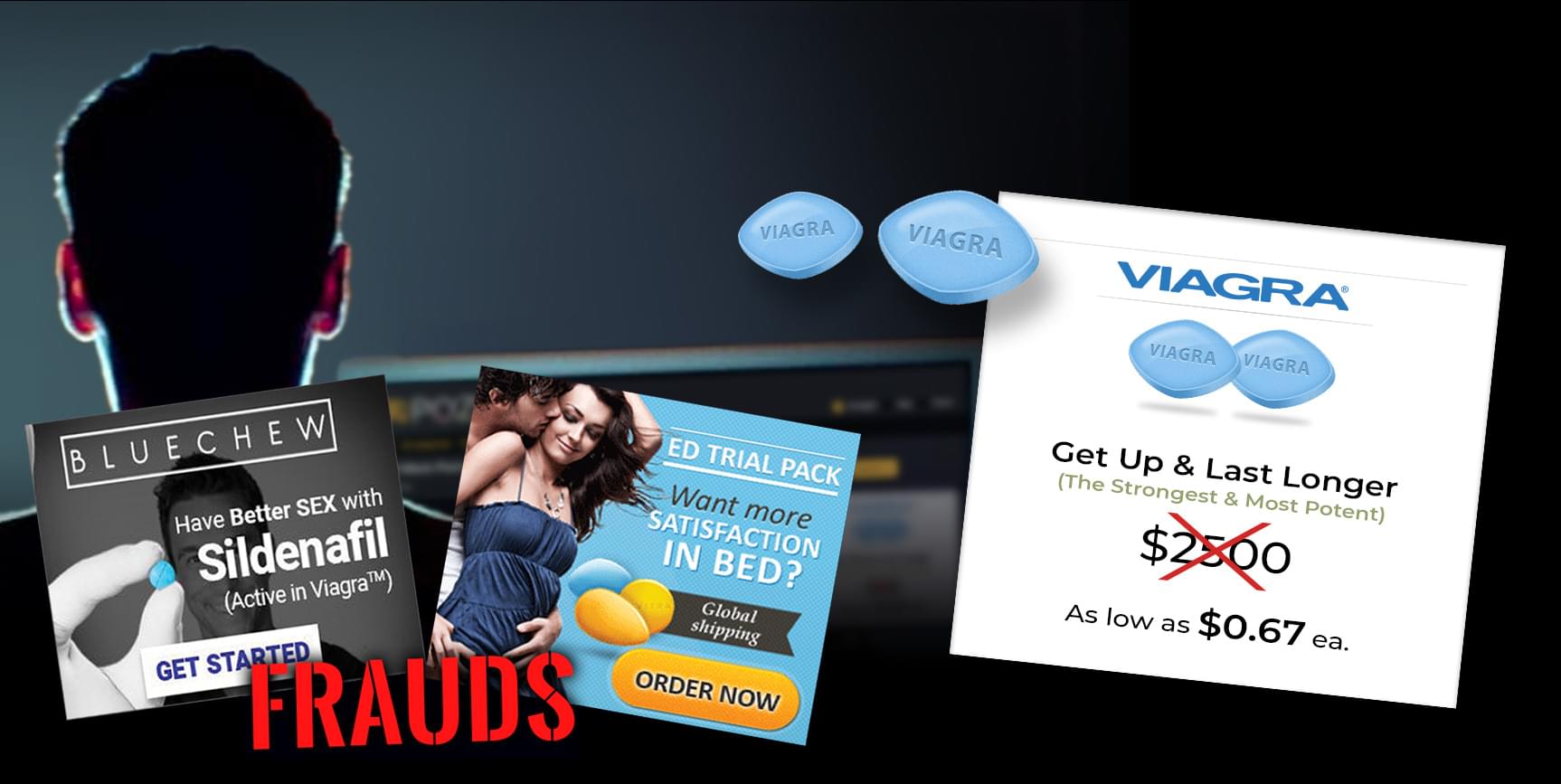 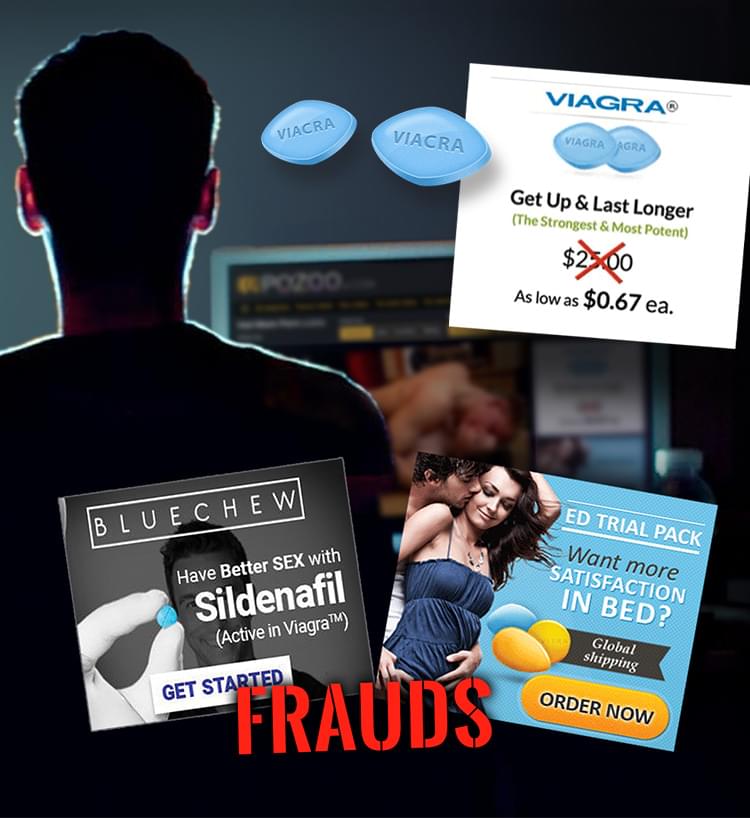 These sites offer crazy low prices because they use fake pills — which are SUPER DANGEROUS (Just ask NBA great Lamar Odom who almost died because of taking fake Viagra). Others are pure credit card fraud that don't even send you fake pills. They just whack your credit card and steal your money. 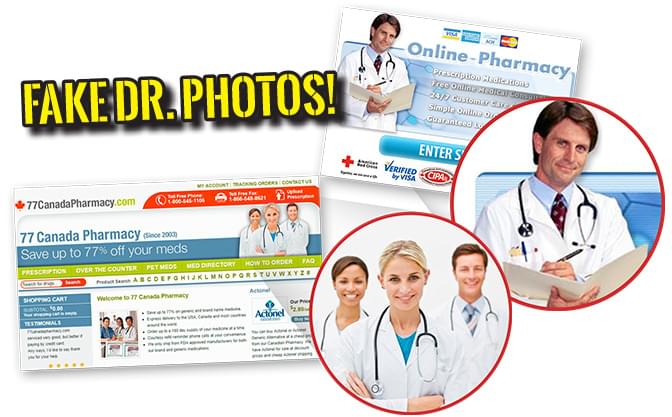 There are hundreds of websites featuring photographs of some handsome doctor in a lab coat with a stethoscope around his neck and a chart in his hands. The doctors are not real— they are fake. Scammers steal these photos and plaster them on websites to give an air of legitimacy. Unless a doctor is identified by his or her name— then 99 out of 100 times it’s fake. Always check to make sure a doctor is real and not just some stock image photo. 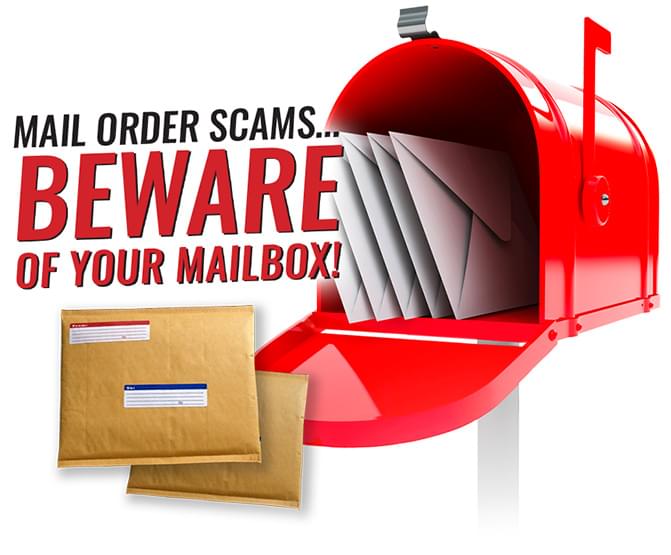 One of the hottest mail frauds this year is promotions for generic Viagra and generic Cialis for rock bottom prices.

Now that word is out that the price of Viagra and Cialis has dropped like a lead balloon because generics are now approved by the FDA, the scam artists have gone into overdrive sending out fraudulent solicitations through the mail. Most mail order offers for "E.D." pills are a credit card scam — so watch out! 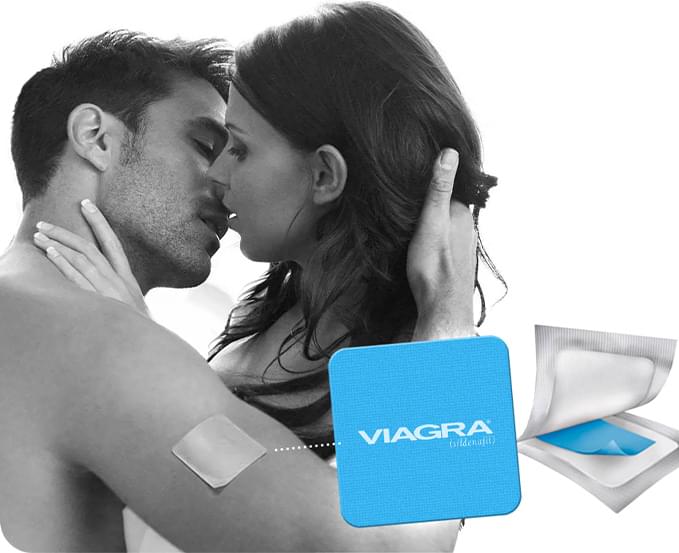 Here is a clever little scam — The Viagra Patch. They send out millions of emails promising a patch loaded with Viagra that is supposed to work in under 10 minutes! It’s pure bullshit. A sick gimmick playing off the success of the nicotine patch. Don’t fall for this slick scam. 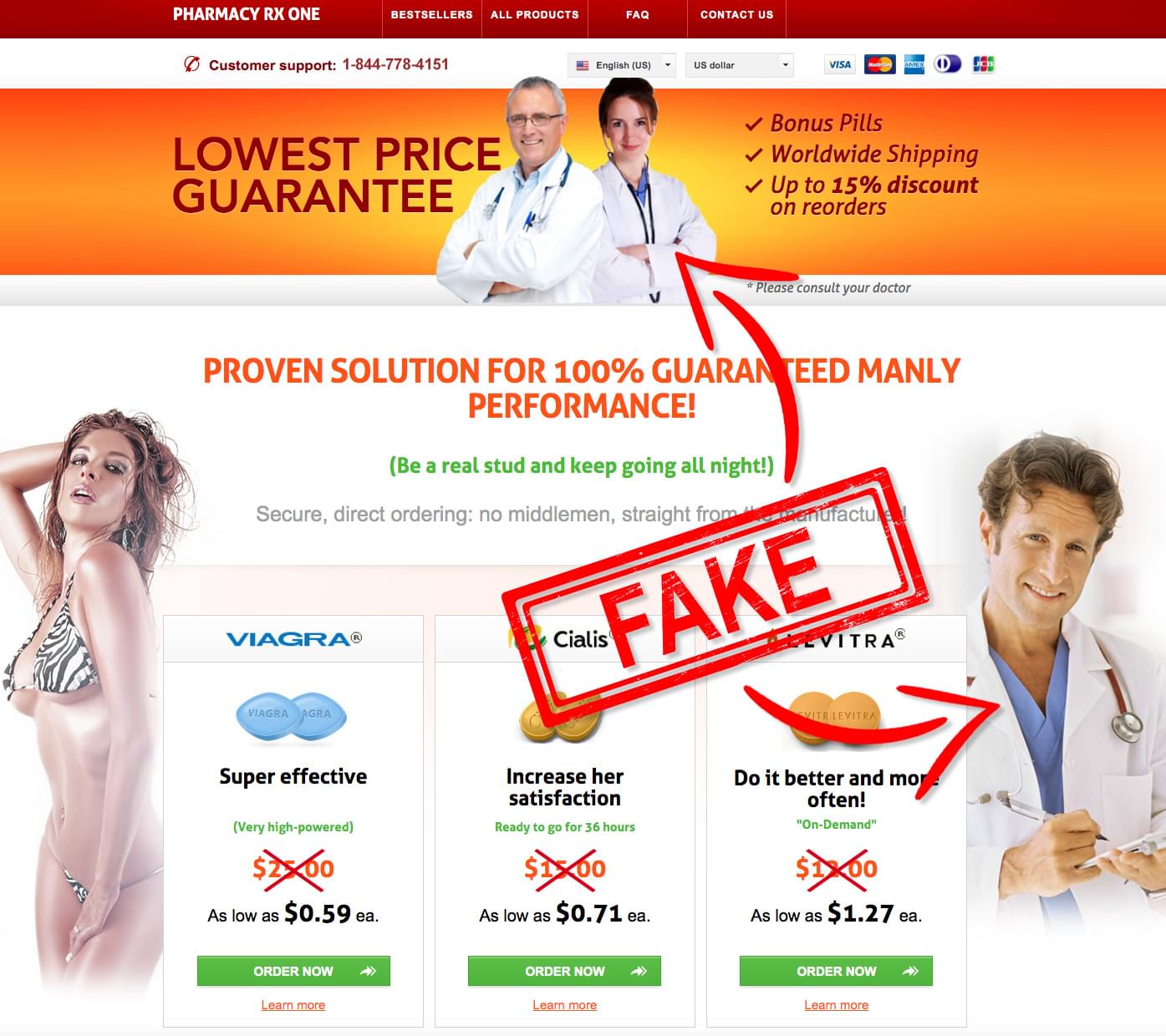 PharmacyRxOne247.com Twenty Four Seven — this website sells fake pills traced to rogue labs in China, Romania and Pakistan. It is run by a group of international criminals who have fleeced men around the globe for millions of dollars. They are wanted in both Europe and North America. Yet, they have managed to stay one step ahead of the FDA, FBI and Interpol. This dangerous website is believed to be where NBA superstar Lamar Odom got the loaded pills that almost killed him when he collapsed and had to be rushed to the emergency room when he was vacationing in Nevada and took some fake pills.

Look at their prices... $0.59 for a Viagra and $0.79 for a Cialis... this means they are fake. The website always looks the same — they just keep changing URLs to stay one step ahead of the authorities. Don't get tricked by these crooks.